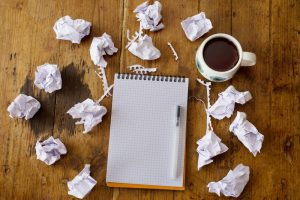 Book titles are one of the first things the reader will notice about books. Your self-published novel should have a dynamic title. It should intrigue, invite, and make a promise to the reader. Finding your book title is difficult, however: there’s a lot of pressure to get it right.

Your title should work as a teaser, in a way. It should grab the attention of anyone walking through a bookstore. Book titles are always relevant to the story (this seems obvious), but they should also be indicative of what is to come. Think of how the Harry Potter books by J.K. Rowling are formatted: Harry Potter and the (X). Whatever that last part is, whether it’s the Sorcerer’s Stone or Order of the Phoenix, the reader already knows what will come into play in the novel.

Another example is bestselling novel The Girl on the Train. It doesn’t give away too much of the story, but the reader understands that a girl on a train is going to be at the center of the novel (and in this case, she is the protagonist).

But they shouldn’t give everything away

Some book titles can be more convoluted. Their meaning for the novel may not be immediately obvious, but subtle titles are nonetheless effective. You don’t want to reveal absolutely everything in your title.

Your title should be creative and artistic

As a part of the book cover, book titles should be poetic in their own way. While drawing in a reader and revealing what’s to lie ahead is important, it’s all for naught if the title isn’t beautifully written. Just as the cover needs to be beautiful to accomplish its job, so too must a title. This is why writing a title can be so difficult.

Sometimes, a good title is just one word, short and concise. Most of the time, the title is just a name: Lolita, Beowulf, Dracula, Frankenstein. Short titles need to be punchy. Since there isn’t much room to draw your reader in, the word needs to be interesting, catchy, and relevant all at once.

Long titles – and how to do it right

If a short title isn’t the option for you, consider a longer one. This can be tricky, too, because while you don’t need to worry about catching attention in one word, you do need to worry about being too wordy and dragging on. Long titles could be pulled from specific phrases in the novel, or it could be a sentence explaining the book. Or, it could pull from other literary works, like Ta-Nehisi Coates did in his 2015 memoir Between the World and Me. This phrase is directly borrowed from Richard Wright’s 1935 poem of the same name.

Another good example of a long title comes from self-published poet Amanda Lovelace. The title of her originally self-published collection is the princess saves herself in this one. Self-published in 2016, Lovelace’s book is now a Goodread’s Choice Winner. The title works as a part of the beauty of the story. It’s a spoiler, in a way, of what lies within, but it’s so striking and different that the reader can’t wait to see how the princess saves herself. The book is a complete reversal of almost every fairy tale ever written, and by stating so in the title, the reader is instantly hooked.

Sometimes, a longer title could be due to a subtitle. Subtitles are mostly used in nonfiction work and are a secondary title.

When self-publishing, there won’t be an in-house editor to ensure that your book titles are good titles.That means that all the work to come up with a strong title will fall on your shoulders, but this is an opportunity, like anything else: to create the best book title you possibly could.