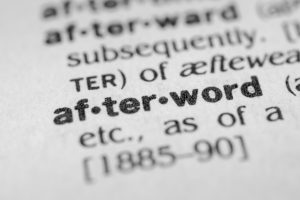 Just like the foreword comes before the story within a novel or a book, the afterword comes after and is included in the back matter of the book. The afterword is often confused with the postscript.

As you learned in our series on front matter, the foreword is a section of a book written by someone other than the author, and it discusses the author, the book, and events surrounding the book.The afterword is a lot like the foreword, except it’s located among the back matter of a book. The back matter is found at the end of the book, after the body text, and it includes the epilogue, appendix, glossary, afterword, etc.

How to Write an Afterword

The afterword is a literary device that comes after the central story (otherwise known as body matter) and addresses how the book came into existence, how the idea for the story was formed, answers any questions that may have been left unclear, etc. Though it can be written by the author of the book, it’s usually written by someone other than the author. Most of the time, the book will have either a foreword or an afterword. Using both is rare, and if the book does happen to have both, they’ll most likely be written by two different writers.

If it is written by the author of the book, the afterword will be about how the book came to be and the situation surrounding it, and it will offer some sort of final or concluding thought on the subject.

Afterwords are especially great (and more common) to use when a book has been reprinted after the initial publication. In this case, the writer will discuss the reception of the book, it’s cultural significance, and impact on readers and other creative works. Classic novels (such as Frankenstein, Pride and Prejudice, Crime and Punishment, etc.) often include an afterword that will discuss the book’s impact on the literary canon, society, other writers, and more.

How is a Postscript Different?

For all intents and purposes, an afterword and a postscript function in relatively the same way, but they aren’t the same thing. Postscripts can be used in books, as short add-ons to the original story. They’re more commonly used in letters or other forms of personal communication, though. The postscript (or, “P.S.”), in letters, functions as a sort of afterword – as a way to add a final thought after the conclusion.

Afterwords, however, don’t fall within the story of the book. They’re about the situation surrounding the story.

Should Self-Publishers Write an Afterword?

Self-publishing a book may make for an even more fascinating afterword than that of a book traditionally published. The story behind the story of a self-published book is unique. The author should take advantage of this opportunity. If you choose to include one, there are a couple options on how to write an afterword.

Maybe you self-published a book years ago, and you’d like to re-publish a different edition. This is the perfect opportunity to include a section that the original may not have had. It could then address how the book was received, what you learned from the process, and how the material has aged over time.

If you choose to have someone else write it, be sure to pick someone who is familiar with your work and your creative process. This could be a colleague, an editor, a workshop member, or a family member or friend who always reads your writing. Their reaction to the self-published book should be included in the afterword, as well as their interaction with you as an author.

Just remember that like the foreword, the afterword is completely optional. Nothing within your book will be changed by its absence. The story will be fine on its own. Should you decide, however, to include one, refer to this blog if you find yourself wondering what to write about. As a part of the book’s back matter, the afterword will cleanly wrap up the entire novel, memoir, or biography and leave the reader with a sense of closure.