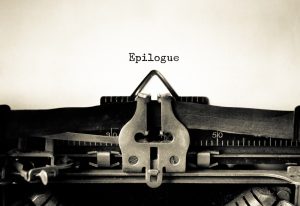 Sometimes, when all is said and written, and a story has reached its resolution, there’s still something that is begging to be told: some sort of final thought, one that doesn’t quite fit into the narrative arc. This is where an epilogue comes in handy. But what is an epilogue? An epilogue is like a prologue, but it comes after the events of a novel. Why do authors write epilogues? And should self-publishers include on in their work?

If you’re a first time novelist, you may be asking yourself: what is an epilogue? The epilogue definition is a chapter or segment that comes after the main story and concludes it in some way. An epilogue goes a step beyond resolution. It may be only one scene or several scenes, but it must have some sort of impact on the story. Any scene that happens after won’t do; it has to be relevant, and it must pack a punch.

Epilogues are set apart from the novel intentionally, so the epilogue must stand out. If it’s a scene(s) that could be thrown into the last chapter, it shouldn’t be in the epilogue. The epilogue usually ties up loose ends: it tells the reader what happened to certain characters or how the world of the story was changed by the book.

An epilogue can soothe the reader in a way that the end of a book sometimes can’t.

How to Write an Epilogue

Each epilogue will look different depending on who is writing it. The best way to decide how to write an epilogue is by answering these following questions:

Now that you have the answer to what is an epilogue, you may be asking yourself, but what makes a good epilogue? One popular epilogue example is found in Harry Potter and the Deathly Hallows, the seventh and final in the series, in which author J.K. Rowling wrote a scene set 19 years after the events of the novel concluded. In the epilogue, Harry is sending his kids off to Hogwarts, the magical school he attended, and there is a distinct feeling of a conclusion or happy ending.

Plot Structure and the Epilogue

All novels follow some sort of narrative arc. How quickly they progress through the arc is determined by the author, but the same marks are hit: exposition, rising action, climax, falling action, resolution. This is also known as Freytag’s Pyramid, after a nineteenth century German novelist noticed that there was a common pattern found among novels. He then diagrammed it as a pyramid, like so:

The epilogue falls outside of the narrative arc. It comes after the dénouement. It can set days after or years after, depending on what the story calls for.

An epilogue is a part of the story: it takes place within the world of the novel, includes the characters and events that have taken place.

An afterword, however, is much like a foreword or an introduction, only after the novel, as the name would suggest. An afterword is a place for the author to discuss the events that took place, how the novel came to be, discussion questions, etc. Sometimes an afterword is added years later, to later editions of the novel, and the author discusses the impact the novel had on readers/culture.