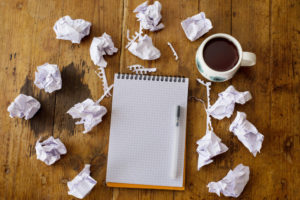 Here are some inspirations behind famous books.

Writing inspiration behind The Cat in the Hat

Theodore Geisel (aka Dr. Seuss) wrote The Cat in the Hat as a response to children’s books of the day. These books were boring, and the characters were boring. The main characters in The Cat in the Hat are Dick and Jane, directly derived from popular basal readers. These educational books were too boring to teach children, Dr. Seuss claimed, so he wrote a book that would both teach and entertain. Obviously, the book was a hit. According to one article:

Upon publication in 1957, The Cat in the Hat was an instant hit and made Dr. Seuss a world-renowned children’s book author. It also led to the creation of Beginner Books, a publishing house that produced books similar to The Cat in the Hat to help children learn how to read.

The Hobbit by J.R.R Tolkien

Tolkien was, supposedly, inspired by a blank sheet of paper. According to a source:

J.R.R. TOLKIEN was grading college exam papers, and midway through the stack he came across a gloriously blank sheet. Tolkien wrote down the first thing that randomly popped into his mind: “In a hole in the ground there lived a hobbit.” He had no idea what a hobbit was or why it lived underground, and so he set out to solve the mystery.

Tolkien then went on to tell The Hobbit (in its early form, of course) as a bedtime story to his children. As the tale developed, it became clear that it was more than just a simple bedtime story. Fantasy back then, of course, would’ve been viewed as a childish thing. Tolkien, followed in suit by other Inklings, would prove that it was much more.

On the Road by Jack Kerouac

On the Road was inspired by real-life events and travels with Kerouac’s group of friends. Neal Cassidy infamously inspired the character of Dean Moriarty. Much of the events of the novel are likely nonfiction, based on the time Kerouac spent traveling with other beat poets and writers.

Meyer had a dream one night – a dream that would, eventually, become a chapter of Twilight. The dream was of a couple in a meadow full of brilliant sunlight. The boy was sparkly, and the girl was normal, human. This dream became a starting point for Meyer. She built the world of Twilight around it, and the dream itself became a scene in the story: a scene where human protagonist Bella witnesses vampire Edward’s skin in the sunlight. His skin – you guessed it – sparkled.

Pride and Prejudice by Jane Austen

It’s rumored that this classic story of love, family, and social standing was inspired by Austen’s own first love. At the time she wrote it, Austen was the same age as her protagonist, Elizabeth. Of course, Austen heavily drew from the ways of society at the time, and her family would have served as inspiration for her characters. Whether she drew from real life love or not, one thing is sure: Pride and Prejudice has lived on as one of the greatest love (and, really, life in general) stories of all time.

Obviously there are many more examples of writing inspiration – how authors stumbled upon that one thing that set off the creation of their novel. There’s an entire hoard of novels inspired by Shakespeare.Beautiful writing can easily inspire more beautiful writing, and that’s the wonderful thing about authors, traditionally published or self-published: what their work can then influence, create, and change.