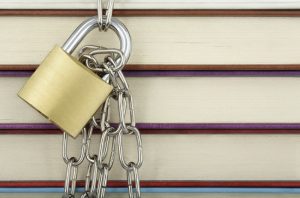 The final week of September is Banned Books Week. This is a time to celebrate freedom of speech while investigating the causes behind censorship. Banned Books Week invites us to not only read banned books, but to delve deeply into them and to ask questions. Every year there seems to be more and more books on the list: some for obvious reasons, others not. What remains the constant over the years is the discussion behind what it means to ban a piece of literature, a piece of art.

What are banned books?

A banned book is any book that, over the course of its lifetime, has been prohibited from at least one library, classroom, or institution. A challenged book and a banned book are two different things: a challenge is an attempt to ban. There are much more challenged books than banned books. Thankfully, most books don’t make it out of the challenged stage, as they’re boldly defended by readers

A book can be challenged for all sorts of reasons: offensive language, sexually explicit content, graphic violence, etc. Most challenges arise out of consideration for protecting children from “adult” topics, and therefore a lot of Young Adult and Children’s books have found their way onto the challenged and banned list. Other challenges can arise from a difference in beliefs or an intolerance for certain lifestyles.

Parents challenge books more often than any other group. Perhaps their child gets a reading list assigned from a teacher that the parent doesn’t agree with, or their child brings home an unapproved book from the library.Other groups include boards/administration of schools or libraries and religious groups. Most challenges happen at public libraries and schools.

When a book is banned, it’s not banned everywhere. It doesn’t become impossible to buy a copy, and it isn’t illegal to read it (in the U.S., at least). It will just be removed from whatever institution (library or school) the challenge originated from.

Banning books is a controversial topic, because it calls into question issues of censorship and free speech – about diversity of opinion and experience. The American Library Association quotes John Stuart Mill on censorship:

If all mankind minus one, were of one opinion, and only one person were of the contrary opinion, mankind would be no more justified in silencing that one person, than he, if he had the power, would be justified in silencing mankind… But the peculiar evil of silencing the expression of an opinion is, that it is robbing the human race; posterity as well as the existing generation; those who dissent from the opinion, still more than those who hold it. If the opinion is right, they are deprived of the opportunity of exchanging error for truth: if wrong, they lose, what is almost as great a benefit, the clearer perception and livelier impression of truth, produced by its collision with error.

Examples of challenged or banned books

Ultimately, a parent or guardian has the right to have a say in what their child reads, watches, and consumes. But the act of challenging and banning a book takes this too far: it impedes freedom of speech, and it impedes the act of the learning. Banned Books Week brings attention to and supports the right to read and write.