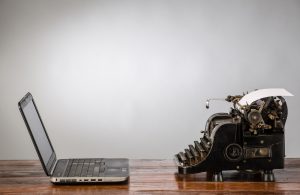 When e-books first came on the scene, traditional publishers, POD publishers, and writers alike were worried that print books would soon be obsolete. There was much excitement surrounding electronic books and the ease with which one could simply download and read a book without even leaving the couch. Speculations were made that print would be obsolete within years and that everyone would opt for tablets or e-readers instead.

Obviously, this hasn’t happened. In fact, physical book sales have risen in recent years. According to a Guardian article, sales in bookshops increased by 7% in 2016, and e-book sales declined by 4%. The article states:

The shift was attributed to the explosion in adult colouring books, as well as a year of high-profile fiction releases, including The Girl on the Train by Paula Hawkins and Go Set a Watchman by Harper Lee. “Readers take a pleasure in a physical book that does not translate well onto digital,” the Publishers Association report read.

There was a collective sigh of relief from all publishers when print sales began to rise once more. However, in the world of self-publishing and Print on Demand (POD) publishers, this can be more complex.

E-books flourish in the self-publishing world for one simple reason: they’re easy. They’re a quick, instantaneous way to get your story out there. Plus, in 2017, anything that’s online has that much more of a chance to succeed. Living in an increasingly connected world, a book that’s just a click away has its draw.

According to Reedsy, traditionally published books see 70% of their gross sales in print and 30% in e-books. Self-published books, however, are the opposite: e-book sales account for more. How, then, do POD publishers expect to rise to the top?

Though e-books are indeed very popular in self-publishing, POD publishers and physical, print books offer something special for writers. There’s something so satisfying about being able to pull a book off your bookshelf and say, I wrote this.

POD publishers also offer an ease that is not normally associated with traditional, print publishing. POD publishers are almost like e-book publishers in that aspect. With a POD publisher like DiggyPOD, you simply upload your manuscript, select how you’d like the book formatted (paperback, spiral bound, hardcover?), if you want it in black and white or color, and how many copies you’d like. Voila! You have a book that you can hold in your hands. You can feel the cover, the pages, the spine; you can smell that quintessential book smell.

As long as readers desire to feel an emotional attachment to books, print books will reign supreme. According to a 2012 study, those who read on an e-reader of some kind did not emotionally connect with the text. There is a beautiful nostalgia in physical books, one that will overpower convenience any day.

POD publishers set themselves apart: there’s nothing quite like it. For writers who not only want to see their name in print, but want to feel their book, want to hold it in their hands, then POD publishers are the way to go.