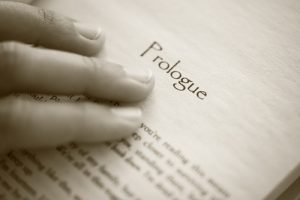 Last week our blog post was all about how to write a novel, part one and part two. This week, however, we’re telling you all about the different parts that make up a novel. You’ve surely heard the terms or seen them in books: foreword, preface, introduction, prologue, and epilogue. But what are they, exactly? Are they interchangeable? Do you need them? We’ll answer these questions below.

Parts of a Novel: The Foreword

A foreword (not “forward”) comes fore the story and is similar to an introduction, but a foreword is written by someone else, not the author of the story. This is a place for the guest writer to persuade the reader to read the book. The foreword doesn’t just tell what the story is about, but often it’ll include praise, personal anecdotes of whoever the writer is (if they’re connected to the story or the author), and any critical thoughts about the book.

A preface is written by the author, and it is about the book: how it came to be, what inspired it, what the writing process was like, etc. A preface is a place for the author to defend their book, essentially.

Where the preface is about the situation surrounding the book, the introduction is entirely about the content of the book. What the reader can expect to find and what’s important for them to know. This is a chance for the author to tell the reader anything they’ll need to know in order to fully understand or appreciate the book

A prologue is a scene that comes before the story. It’s something of import but something that doesn’t flow with the chronology of the story. Say, for instance, a novel is about a thirty-something-year-old man in New York, but the author wants to include a scene from his childhood in which he breaks his arm falling out of a tree. A prologue would be the perfect place for this to occur.

The prologue scene must be relevant to the story, however. If the thirty-something protagonist never mentions or reminisces on that moment in his childhood when he broke his arm, then it has no place being in the prologue. A prologue is an excellent way to introduce something that will have importance on the following story, but it isn’t necessary in all books, so go about it wisely and do what’s best for your book.

Like a prologue, epilogues are only in fiction. It comes after the story and often wraps up the story nicer than the ending did. Think of it as an ending after the ending. It should offer insight into the novel. It doesn’t need to make everything crystal clear or provide a happy ending where it is not necessary. Sometimes there’s a shift in narration, where another character takes over and tells it from their perspective. Or, it could remain the same narrator, maybe a little further along in their lifetime. Maybe your story doesn’t need an epilogue – that’s entirely up to you.

Hopefully things are a little clearer now. Terms like foreword and preface are not interchangeable after all, and none of these components are absolutely necessary to write a novel. It’s totally up to you, the author.