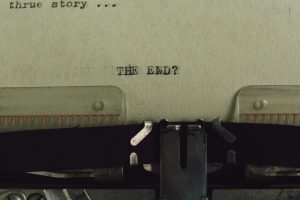 Every Friday in June, we’ll be posting a blog in our series on how to improve your writing. From how to write dialogue or conflicts to how to improve your grammar, our June Writing Series is dedicated to livening up your story so that it’s ready for self-publication.

Remember those words that used to console us when we were younger (and, let’s admit it, even now)? They lived happily ever after. The end. Those words assure us that the characters we’ve grown to be familiar with and even love are safe, sound, and happy. While a happy ending is great in a children’s novel or bedtime story, they don’t always happen when writing fiction. Instead, most endings are ambiguous, though reaching some kind of resolution. Happy endings are great, but rarely are they realistic. Fiction novels, though a creative work of the mind, should be grounded in reality. If you’re going to write a happy ending, or at least some semblance of a happy ending, then you need to know how to write one well.

What are the pros of a happy ending?

First and foremost: your readers will be satisfied. Readers love a happy ending because it assures them everything will be okay. Sometimes, readers can feel ripped off if there isn’t a happy ending: they’ve put in all this time and effort, and they want to feel rewarded for it.

Happy endings are also what your characters deserve, right? Writers can so often become attached to their protagonists – they are their creation, after all. A happy ending can be very desirable for a beloved character.

If you decide to write a happy ending, then learning how to write a convincing one is crucial. Happy endings must be nuanced and called for. If they feel forced or unnatural, your readers won’t be happy (no matter how much they would love a happy resolution). Readers are much smarter than you think: they can see through cheap tricks.

Write a happy ending for some. J.K. Rowling famously did this in the final Harry Potter novel. Some characters got a happy ending: a wife, some children, and a good job. Others, however, did not. Some very beloved characters died in the Battle of Hogwarts.

In Roxane Gay’s 2016 collection of short stories, Difficult Women, some stories ended sadly, and the reader was left feeling sorry for the characters. Other stories redeemed this, though, and allowed the characters some resolution. To only afford so many stories happy endings, Roxane Gay’s stories feel just like life: messy, unpredictable, and varying.

The cons of a happy ending

If you can’t figure out how to write a realistic and convincing happy ending, then maybe it’s best to avoid one altogether. Sometimes happy endings can feel too forced. They can undo all of the work you’ve put into crafting your story. Don’t write an ending that’s going to unravel the story. If the trajectory doesn’t fit, then let it go. Write an ending that feels natural for your story.

There can be resolution in these unhappy endings. In John Green’s The Fault in Our Stars, the ending is not happy. In fact, it’s tearful. But protagonist Hazel Grace finds some hope in the pain. She isn’t okay by far, but she knows she will be.

Another YA novel, The Book Thief by Markus Zusak, is set in WWII. This should be a huge disclaimer that the ending won’t be happy. And it’s not. It would have been too easy for Zusak to write a happy ending for his characters simply because he can. He’s the writer, and everything is his decision. He didn’t, however, because he knew that it wouldn’t feel right to the story. He had to hard thing and make his characters suffer.

Ultimately, if the story doesn’t call for it, and you don’t know how to write it, forgo a happy ending.