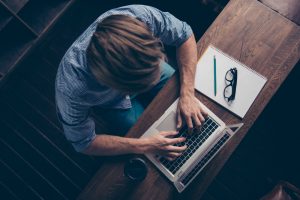 Art is a refuge. It’s a cornerstone of society, a reminder of beauty and revolution and comfort. Art museums, music, libraries – they’re all necessary aspects in culture. Yet, despite this high regard, too often writers (as well as other artists) are not compensated as they properly should be. It can be difficult, figuring out how to make money as a writer and often that’s because institutions don’t pay what they should, but it’s not impossible. As a writer, you should always hold your art in the highest regard; know your worth and demand it.

Robert Graves once said, “There’s no money in poetry, but then there’s no poetry in money, either.” This idea is a common one: that people don’t do art for money, but rather for art’s sake. But it is highly unrealistic to believe that artists shouldn’t do their work for money when money is livelihood. If you’re in-between self-publishing novels, and you need to supplement your income, you can still rely on your writing ability to do so.

How to make money as a writer

Obviously making money as a writer isn’t impossible. However, when you’re just starting out, and you have yet to establish your career and your merit, you may take on a lot of unpaid gigs. Articles, reviews, short stories – you may, for a while, write for the sake of writing, for the sake of building your resume until you can get to the point where everything you write is for payment.

A lot of writers choose to freelance, both at the onset of their careers and well into them. Freelancing allows for flexibility – the writer can write for different sites, magazines, and papers on a variety of subjects. They don’t get bogged down and restricted to one specific column or blog.

Freelancing, however, can be risky. It’s recommendable to always have a contract and get a deposit before you begin to work. According to Double Your Freelancing, you absolutely need to “set the precedent that if you’re not paid, you don’t work.” Often some freelancers run into the problem of not getting paid once they’ve sent the work in.

If you write books, then you’ll likely make money. Of course, it comes down to marketing the book and how well it sells. Publishing a book doesn’t guarantee money, it just guarantees that there is a chance it will be bought. It’s ideal, of course, to make money writing fiction or to make money writing short stories, but getting to the point in your career where this is possible can be difficult, so it’s important to set up other means of income in the meantime.

For more experienced journalists and content writers, they’re employed as staff, with consistent content, pay, and benefits, whether for magazines, newspapers, or websites. Obviously those who write for well-known magazines have the chance to make good money, but it can take years to rise to these positions.

Ghost-writing is rare, but it happens. Ghost-writing is when someone – famous or otherwise – wishes to write a book but lacks the skill to do so. They’ll employ a writer to write it for them. If you’re trying to figure out how to make money as a writer, ghost-writing is a great opportunity, but one that doesn’t happen frequently. It also doesn’t accredit much to the ghost-writer, since the employer is, officially, the author.

The most important thing when deciding how to make money as a writer is to know what you’re worth. Too often writers will take low or non-paying jobs as a way to get credits to their name or build a resume. But writing, like anything else, is a skilled trade. Some can do it, some can’t, and those who can should be properly rewarded for their craft.

It all comes down to you, writer. Do not accept anything you feel is not enough. Know what your talents warrant. Don’t let a company get away with not paying enough or not paying at all. Writing is a gift, to be shared, but it is also one to be profited from. Writing can be a career, but you must be diligent, persistent, and loyal to yourself.