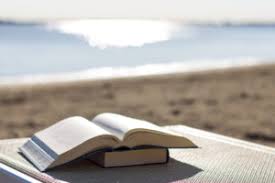 It’s June, and even though summer doesn’t officially start until the summer solstice—June 21—it’s basically already summer. So get on that swimsuit, hit the pool or beach, and don’t forget to bring along the first book on your summer reading list!

Why are summer reading lists so popular? Maybe they stem from the days of elementary school where schools would supply the list for their students. Or, maybe it’s because books (well, some books) are seen as the ultimate source of relaxation. There’s nothing quite like laying out in the sun with a good book at your side. Vacations also increases in the summer, due to the kids being off school and the weather being more cooperative, so people have more down time to read. Whatever the reason, we aren’t complaining! We’re always supportive of any kind of reading list but especially a summer reading list.

What makes something a “beach” read?

Chances are, you’ve heard this term when discussing summer reading lists. Reading on the beach is a popular pastime, but it seems a certain type of book has cemented itself as the official beach genre. But what are beach reads?

Most beach reads are contemporary fiction. You likely won’t find someone reading Crime and Punishment or Frankenstein on the beach. No, no. Beach reads are fun, easy, and light. According to the New York Times, the term, and subsequent pseudo sub-genre, really began to make waves in the 1990s (pun intended). A lot of beach reads could also be classified as Chick Lit. They’re about women and largely read by women. Though some of them can veer into sexist territory, the subgenre is pretty successful. Beach reads definitely target women, and this in itself is great marketing plan. Women have a lot of buying power in American households, so the books sell. Women tend to read more books than men on average. British author Ian McEwan once said, “when women stop reading, the novel will be dead.”

Beach reads aren’t convoluted or deep, really. Instead, they’re fun escapes, full of love, heartache, mystery, and intrigue. The beach is a vacation; beach reads should be, too. Therefore, a summer reading book list should feature books that allow for an escape from reality.

How can self-published authors land on someone’s summer reading list?

Self-published authors want to sell books. Marketing your book as a “beach read” is definitely a good marketing ploy. We’ve already established that romance novels sell well (there’s an estimated $1.08 million in romance sales each year). The good thing is that the romance genre is very broad. This means there’s tons of wiggle room within the genre for any type of self-published writer. Whether it’s historical romance fiction, paranormal romance fiction, young adult romance fiction, or science fiction romance, it could very potentially find its place within the beach reads’ culture.

Writers who create worlds that are intriguing, sexy, mysterious, and enrapturing can very well find themselves on someone’s summer reading list. The subgenre itself is limitless.

Where can I find beach reads?

There are several lists already out there for the 2017 summer.

Still not convinced? Maybe you’ll listen to the King (Stephen King, that is):

Stephen King thinks you’re a pretentious fool for reading “serious” novels during the summer. It, like, literally pisses him off. Mr. King seems to embody the argument of the “beach read” camp, which goes something like this: you should only read stuff that doesn’t require a lot of concentration.

Do you have any summer reading recommendations? Leave them in the comments below!