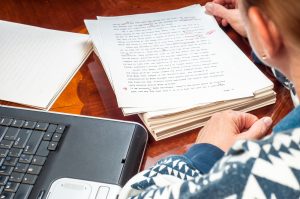 Imagine this: you’re reading through what you think is a print-ready proof of your manuscript, ready for it to be printed, bound, and shipped out, only to find countless spelling and grammar errors. Suddenly, what you thought was ready to be printed and sold needs another round of edits (maybe a few). Doesn’t sound fun, does it? We don’t think so. That’s why we believe taking steps to eradicate these common writing mistakes from your work is crucial. Our latest blog series has been all about strengthening your writing and improving your craft. Taking steps, such as attending writing workshops and retreats, and following writing prompts and other exercises, to improve the quality of your work is great, but it’s all for naught if it’s riddled with the same mistakes over and over again.

Here are some common writing mistakes that hinder your work. Do yourself and your craft a favor, and cut these errors.

Out of all the common writing mistakes, this may be the one editors see the most. A lot of people mix up “you’re” and “your.” Just because the words sound the same, doesn’t mean the two are interchangeable (this is known as a homophone). They mean entirely different things.

People who struggle with “you’re” and “your” will probably struggle with “there,” “they’re,” and “their” for similar reasons. Let’s take a look at what each word means.

When you add an apostrophe at the end of a name, for example, “That’s Brian’s bag,” it becomes possessive. This isn’t the case with “it’s,” however, and this often causes some writers to stumble.

Commas account for a lot of errors in manuscripts. There are a lot of comma rules that may be difficult to remember, especially if it’s been awhile since you’ve been in school. Here are some very basic comma rules.

Commas are used to separate items in a list for clarity. For example, “I went to the store to buy chicken, eggs, and potatoes.” The last comma, before potatoes, is often up for debate. Known as the Oxford comma, some people don’t find it necessary; others do.

Use a comma before a conjunction to combine two independent clauses

Use a comma after an introductory dependent clause

Use commas to separate quotes

This list is not exhaustive. For more comma rules, we recommend picking up a copy of Strunk and White’s The Elements of Style.

Edit Before You Self-Publish

Don’t let common writing mistakes negate all the hard work you’ve put into your manuscript. When you send us your files, your work should be neat, clean, and error-free. This guarantees a beautiful final product that you’ll be proud to place on your shelf, sell online, or give to loved ones. Common writing mistakes can be difficult to eradicate altogether (you’re only human!), but with a little practice and guidance, you can learn how to spot them. If you struggle with these common writing mistakes and don’t have an eye for editing, consider hiring a freelance editor. What matters is most is your book, so do all you can to make sure it shines.