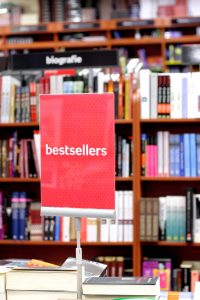 Ever wonder how bestselling authors actually write bestseller books? Every writer does! It’s every author’s dream to hit it big: to write that book no one has thought of yet, to revolutionize a genre, to get movie deals, spin-offs, loyal and dedicated fans, etc. Any and every bestseller list is desirable. It’s a dream, and like any dream, it is achievable but only through hard work and understanding what makes a bestseller a bestseller.

Bestseller books should appeal to a broad audience. This isn’t to say that they must appeal to everyone in the world – that’s impossible. However, they should appeal to a big enough audience that you sell lots of copies. Writing genre novels is totally okay – genres are popular for a reason. However, if you’re going to pick a specific genre, say, Science Fiction, make some aspect of the novel a little broader. Take for instance the worldwide bestseller The Hunger Games. Science Fiction? Yes. But it was also a YA (Young Adult) Novel, which helped it sell a whopping 23 million copies in the U.S. alone.

Writing a book that has mass appeal doesn’t mean you must cater to the whims of every possible reader out there. The best way to draw a crowd is to create something you love. If you’re passionate about your work, it’ll show, and it’ll inspire passion in others.

Bestsellers Innovate a Genre and Set a Trend

Since it’s publication in 2012, Gone Girl, by Gillian Flynn, has revolutionized the mystery/thriller genre, and it’s definitely set a trend. Gone Girl burst onto the scene and did something rare: it gave a woman a voice. Both protagonist and antagonist, Amy Dunn is an anti-hero of the best sorts. She isn’t some flimsy, weak portrayal of an idealized woman. Amy Dunn is messy, conniving, and – shocker here – unlikeable. Gone Girl spent 8 weeks at the number one spot on the New York Times Bestseller List, twenty-six weeks on NPR’s hardcover fiction bestseller list, and it inspired an Oscar-nominated movie.

Not only did Gone Girl innovate its genre (by giving women a voice, rather than keeping them as simple plot devices or sexual objects), it also inspired a whole slew of mystery/thriller novels that centered on complicated, convoluted, and unlikeable female protagonists. Several novels, as well, went so far as to put the word “girl” in their title. For example: The Girl on the Train by Paula Hawkins, The Girl in Cabin 10 by Ruth Ware, The Luckiest Girl Alive by Jessica Knoll, Girls on Fire by Robin Wasserman, etc.

In an article in the back of Girls on Fire (originally in The Guardian), Judy Berman says:

Inspired by Gillian Flynn’s 2012 blockbuster Gone Girl, a whole host of novels have set themselves up as explorations of or elaborations on certain feminine stereotypes. These novels take the shape of thrillers, but their animating mission is to question.

Gone Girl, then, should be something that authors aspire to: demanding change, inspiring a trend, and dominating the bestseller list.

However, Trends Only Last for So Long

Bestseller books are no exception. Remember the vampire trend that happened a few years ago, brought on by Stephenie Meyer’s The Twilight Saga? That seems to have passed. Though it made way for hoards of vampire novels to cover both YA and Adult Fiction shelves, it, like any other trend, soon passed. Dystopian novels à la The Hunger Games soon took it’s place.

This isn’t meant to scare or dissuade authors. It’s merely something to pay attention to. Even if a trend has past, books that follow it can still succeed. It may just be best to strike while the iron is hot.

There’s no one formula or one right way to write a bestseller. Bestsellers arise from passion, hard work, dedication, and a captivating story. The story must, above all else, be good. No – it must better than good. It must be the best.

Top Selling Books of All Time

Here are some bestsellers that have stood the test of time: