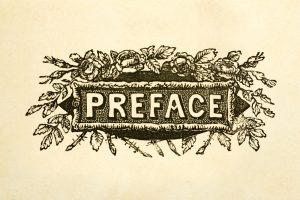 Over the last couple of weeks, our blog has been focused on the varying aspects of a book’s frontmatter – from dedications to forewords to today’s post, which focuses on the preface. The preface is a section that comes before the story, and it is often jumbled up with the introduction, foreword, and prologue. These terms aren’t interchangeable. However, it’s important for self-publishers to know what a book preface is and how it is different from other frontmatter.

The definition of preface (n) is, “an introduction to a book, typically stating its subject, scope, or aims.” A preface is written by the author, and it is about the book: how it came to be, what inspired it, what the writing process was like, etc. A preface is a place for the author to discuss the situation surrounding their book, essentially, and is more often used in nonfiction books.  Often, the author will conclude it with a list of acknowledgements: thank yous to editors, publishers, or other influential people who helped bring the book to life.

How is This Different From Other Frontmatter?

Prefaces are different in that they discuss the inspiration, writing, and publishing of the book. Introductions are solely about the content (themes, characters). Forewords are essays written by other writers/authors about the book and its author. Prologues are a part of the story and are comprised of a scene or multiple scenes that are pertinent to the plot.

How to Write a Preface for Your Book

This should be easy after writing a book! This section of the frontmatter can be as short or as long as you’d like. It’s a place to be honest and open with your readers about the writing of the book – be it a fictional, romance novel or a biography of Abraham Lincoln. With interest in the book comes an interest in the author and how they created the work, so readers are naturally drawn to the preface.

Keep these things in mind when writing:

Below are some preface examples to give you an idea on how to write a preface for your book:

Into the Wild (Nonfiction, Biography) by Jon Krakauer

Jon Krakauer prefaces Into the Wild, the biographical account of the disappearance and death of Chris McCandless, with a quick two-and-a-half-page essay on how he came to write about the topic in the first place and how his coverage was received by friends and family of the late Chris McCandless.

Smith’s preface works as a note to the reader: to explain to them why she wrote what she did in the 1970s, how it differs from what she thinks now, and how she remembers it. In this short statement, she says, “The seventies. When I think of them now I think of one great film in which I played a part. A bit part. But a part nonetheless that I shall never play again.”

Tatiana de Rosnay prefaces her Holocaust novel with a brief author’s note, stating that while the story is fictional, certain events within it actually happened.