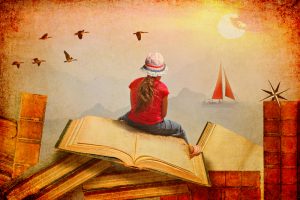 The setting of a story, whether a book or short story, if written well, can, in a way, become another character in the novel. Despite it being the background of a novel, sometimes it can transcend space to become something more. The plot of the story revolves around it, the characters live in it, and the reader becomes engrossed by it. When deciding on the setting of a story, the writer must be sure it’s one that adds to the plot of the story rather than hides in the background.

What is a setting in literature?

The setting is the background of a story. Literally. It’s whatever town, city, country, planet, dimension, or world the events take place in.

Why is the setting of a story important?

Setting grounds your readers. It gives them solid footing and allows them to exist in the world of the book, because you’ve written the world for them. Sometimes the setting calls for a deeper explanation, as in fantasy novels like Harry Potter, Game of Thrones, and The Lord of the Rings. In those novels, the author quite literally has to create the world of the book (also known as worldbuilding). Hogwarts, Westeros, and Middle Earth didn’t exist prior to Rowling, Martin, and Tolkien creating them.

The setting, if written strongly enough, can also become like a character in the book itself. In The Lord of the Rings, Tolkien describes Middle Earth with such fantastic detail and depth that it comes to life.

Begin to think of settings as characters in your story. A character plays against other characters, increasing tension, creating drama, and advancing the plot. A story about a man in a hurricane is about two characters. A story about a stepfather and a boy and a toy store is about three characters. As noted elsewhere, Henry James commented that he could not imagine “a passage of description that is not in its intention narrative.” Poe knew that already. Hemingway never forgot it. Make readers feel where actions are taking place, whether in the lobby of Radio City Music Hall or in a smoked-eel shop.

How the setting of a story is established will depend on who the narrator is. Storytelling is ultimately the job of whatever narration style the novelist chooses, but how that narrator tells the story will vary. For example, a first person narrator (a narrator who uses the pronouns “I” and “me,” the main character) will establish the setting based on their experience and what they see. The reader, therefore, will only be able to experience the setting through the first person point of view. First person narrators may sometimes be unreliable, but the setting will still have to be told through their viewpoint.

Or, the author could choose to write from the third person perspective, in which an outside narrator will relay the events and setting of a story. A third person narration may be able to describe more of the setting in fuller detail, especially if it is a third person omniscient narrator.

Going above and beyond just a place

The setting of the story is also so much more than just geography. The setting could be a teenager girl’s bedroom, music playing softly, the sound of her parents talking in the kitchen drifting through the walls, all the while she and her friend discuss what’s been happening at their school. Elements of sight, sound, smell, and touch all come into play in setting.

Imagine, your book is set in Antarctica. An explorer, on a mission, finds himself crossing vast swaths of icy land. What does it feel like? Cold, one would imagine. But what does it smell like? What does it taste like? How does the snow crunch underfoot? Is it slippery in spots? If you can describe the entire sensory experience, the reader will experience it alongside the protagonist. This, ultimately, is the goal: to immerse the reader so deeply into the story that they feel a part of it, too.

Once you decide what is the setting of the book, you’ll need to perfectly encapsulate everything about that setting. Include sensory details and character’s emotional responses to it as well as the physicality of it, and your readers will be hooked. If you choose to write what you know, a setting you’re familiar with, don’t skip out simply because it’s set in the “real world.” Regardless of if your story is set in rural Mississippi or a fantastical, mythical land, you’ll need to flesh out the background and bring it to life through your prose. If the setting of a story shines, then everything else can, too.

Got any story setting ideas you want to share? Leave it in the comments below!