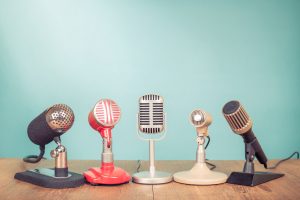 Choosing a narrator for your novel is usually intuitive. More likely than not, as your idea is forming, a protagonist will rise to the surface, and the narration will fall to them. The protagonist is in the center of the story, so it’s only natural that the storytelling will be their responsibility. But choosing a narration form can be difficult. First person? Third person? Second person? Are you confused yet? Don’t worry, we’ll break it down.

There are different options to choose from, and it all comes down to point of view.

This is a very commonly used narration form. A first person narrator will use the pronouns “I” or “me.” This type of narrator allows readers to feel a strong connection. When a reader reads a story from the first person point of view (POV), they feel at one with the narrator, as though they are the narrator.

In my younger and more vulnerable years my father gave me some advice that I’ve been turning over in my mind ever since.

“Whenever you feel like criticizing anyone,” he told me, “just remember that all the people in this world haven’t had the advantages that you’ve had.”

This is a rarer form of narration, and is probably more suitable for poetry or short stories. A second person narrator will use the pronouns “you” and “your.” It feels as though someone is speaking to the reader, or describing what the reader is doing, and therefore makes the reader a very active part in the story.

You are about to begin reading Italo Calvino’s new novel, If on a winter’s night a traveler. Relax. Concentrate. Dispel every other thought. Let the world around you fade. Best to close the door; the TV is always on in the next room. Tell the others right away, “No, i don’t want to watch TV!” Raise your voice–they won’t hear you otherwise–”I’m reading! I don’t want to be disturbed!” Maybe they haven’t heard you, with all that racket; speak louder, yell: “I’m beginning to read Italo Calvino’s new novel!” Or if you prefer, don’t say anything; just hope they’ll leave you alone.

(If on a winter’s night a traveler by Italo Calvino)

Example of a third person narrator:

It is a truth universally acknowledged that a single man in possession of a good fortune must be in want of a wife.

However little known the feelings or views of a such a man may be on his first entering a neighbourhood, this truth is so well fixed in the minds of the surrounding families, that he is considered the rightful property of someone or one of their daughters.

(Pride and Prejudice by Jane Austen)

As you begin to write, your narrator will become obvious. It’s entirely the author’s choice, but it is smart to test out different narrators. First person, third person–find what works in the story. How does this story need to be told?